When writing this program note, I researched the definition of the word profound, and there it was, the perfect explanation of what went into the original creation of this piece: demanding deep study or thought: expressing profound truths in simple language.

In this piece alone you will hear simple minimalist melodies consisting mainly of two to three notes; a twelve tone row, and a construction of the harmonic series (three musical styles that are usually not found in a single work), all brought together under the title of Crazy Nigger. I find it beautiful, frightening, mesmerizing and powerful.

I perform the work as four hybrid pianists in 4.1, using the MalletKat with an elaborate system of loops that I have developed in Ableton LIVE with the Keith McMillen12Step Foot controller. The foot controller is programmable to the point that allows me to keep the organic-ness that Julius describes, in that, when beginning to loop the third part of music in a particular section I am able to clear the loop from the previous third part yet keep the new first part so that the third part contains all of the music of the previous two sections. I’ve reduced the original duration (55 minutes) to 31 minutes, faithfully by equal proportions throughout for this performance, as I feel our ears have evolved to more quickly understand the techniques applied.

9:8:7:5:4:3:1 was created for the festival TIME 20 BK, celebrating the 20th Anniversary of the fearless contemporary arts presenter Bludñy Kámen in Czech Republic. This is a Neo-Totalist piece, using deep looping techniques and simple tweaking on a Push & Quneo in Ableton. The work explores the relationships of the numbers in the title as they relate to one another over time. A truly faithful performance of this would take 1075 minutes, which is about 18 hours. I’ve found that it is possible to sense the process in around 30 minutes.

There are two fundamental aspects to the work: the first is found in the numerical relationships that lay the rhythmic foundation, which develops simply into one giant groove; the second is my sonification of time, which is always changing. This piece is always changing.

9:8:7:5:4:3:1 premiered as a live web cast at the Herb Alpert School of Music – California Institute of the Arts in 2015. It was originally in 4.1 but has been modified to stereo for this performance.

Amy Knoles, Director of the Electronic Percussion Studios and Interim Head of Percussion at California Institute of the Arts, has headlined on major festivals throughout the world. Her music has been described as being of: „frightening beauty, fascinating, complex“ by National Public Radio and she is described as „Los Angeles’ new music Luminary, infinitely variable, infinitely fascinating“ by the Los Angeles Times.

Amy is a recipient of: the ASCAP Foundation „Composer-in-Residence at the Music Center of Los Angeles“, the Meet the Composer „Commissioning Music USA“ award to create Sacred Cow with Butoh dancer Michael Sakamoto for premiere on the NOW Festival at REDCAT, the American Composers Forum Subito Grant, the Durfee A.R.C., the Lester Horton Award for „Outstanding Achievement in Original Music for Dance“, the „UNESCO International Prize for the Performing Arts-2000“, the „Individual Artist Fellowship Award“ from C.O.L.A., to create her Multimedia piece 2 x 10 x 10 x 10 + 1, the „Composer in Residence“ Grant from the American Composers Forum, among many other awards. 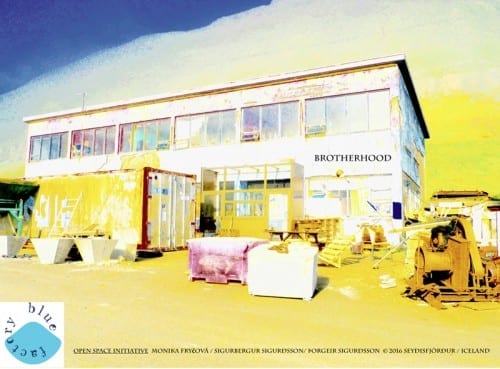 The Blue Factory is a project by artist Monika Fryčová in collaboration with the owners Sigurbergur Sigurdsson and Torgeir Sigurdsson.

It is located in a former herring factory on the north side of the fjord in an almost futuristic micro chilly climate: wind, avalanche pressure and rusty things from the past.

Blue Factory continues its hospitable tradition as a place where locals and foreigners meet and talk.It would like to build a platform, living and working space for Icelandic and international artists, who are excited to integrate into the specific cultural climate of Seydisfjördur and the wonderful and unique surrounding nature.

Blue Factory is about working together and singing with the wales. It is a place to exchange ideas on the brim of Europe, outside from everything that distracts. Recently opened collaborative projects with Skaftfell – Center for Visual Art in Seydisfjördur, Academy of Arts Iceland, and Iceland Electronic Art Association.

Joint the Brotherhood on the North Riviera!