Blink presents works by four artists, who are in various ways exploring mechanisms of observation and documentation in relation to time and space. The exhibiting artists, Jessica MacMillan (US), Maiken Stene (NO), Malin Franzén (SE) and Yen Noh (KR), are artists-in-residence at Skaftfell during October and November 2017. The exhibition is part of the Off-Venue program of the Sequences Real Time Art Festival in Reykjavik, and has been organized by Skaftfell.

“While the Sequences festival uses the term “real time” to refer to time-based media, “Elastic Hours” considers how the term might be applied to the experience of art making, exploring how artists manipulate time as a raw material. The term “real time” also inherently conjures a juxtaposition with “unreal time,” posing the question as to why an abstract metric such as a clock may be considered more real than time as it is subjectively experienced. The clock allows for synchronicity, yet our concept of time is limited when considering microscopic or geologic time scales. Stretching, echoing, and inverting hours, the works included in Sequences VIII often go beyond standardized metrics to investigate alternative systems. These works remind us that our daily rhythms are not solely determined by tradition and locality but can be individualized—customized even—or rooted in natural forces beyond our control.” More 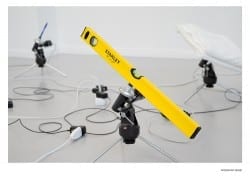 Jessica MacMillan (b. 1987) lives and works in Oslo. She holds a Master of Fine Art from the Academy of Fine Art in Oslo, and a Bachelor of Fine Art in sculpture and art history from the Massachusetts College of Art and Design in Boston. Through the medium of sculpture and installation, Jessica’s artistic production investigates concepts in astronomy and their relationship to the actuality of daily life on our planet: not only the tangible, physical directions and orientations—but also the distances and structures we can never fully experience with our limited senses. Here Jessica presents four kinetic sculptures from her installation Antiplanet (2017), which have been constructed using found objects and the same equipment and techniques that are used for guiding telescopes. The four sculptures in this installation are aligned with the axis of the planet, and rotate at the same speed–but in the opposite direction. Counteracting the rotation of the planet, these sculptures become physically aligned with fixed points in the sky.
“There is a gap in the relationship between our everyday experience and our larger context: on a planet, in a solar system, within a galaxy. It can be argued that in astronomy, reality and appearance are more disconnected than in any other area of human experience.This creates a necessity for metaphor, and also the opportunity to explore the structure, materialities, and significance of our human experience from different angles. Scientific instruments often require calibration to keep them precise. To “calibrate” in this sense, is to take external factors into account while making adjustments for accuracy. This is what I hope to accomplish with my art—to offer a different kind of calibration: an opportunity for assessment of the scale of human life, the limits of experience, and our collective concept of (and hope for survival in) the future.” (Jessica MacMillan) 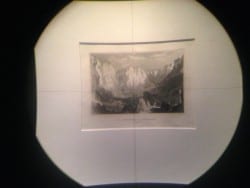 Maiken Stene (b. 1983) graduated from Malmø Art Academy and lives and works in Oslo and Sokndal, Norway. Maiken uses painting, installation, text, video, and sound to research the connection between geology and landscape painting. Her work studies how both disciplines have gradually formed nature and our understanding of it. In the video This Land is My Land (2014, HD video, 7 min.), Maiken uses, and irreversibly transforms one of her previous works, a scenographic painting based on a print from 1840 which depicts a Cornish tin-mine.
“I packed up the painting/set and drove it to a gravel pit in northern Skne where, with good help from photographers and pyro-technicians, I blew up the landscape with dynamite. The sound is from a real blast recorded in the iron mine Titania in southwest Norway.” (Maiken Stene)
Presented as a video installation, the work includes the original print of the tin-mine, hung upside-down. It can be viewed through an old theodolite, a land survey tool used by mining companies, which flips the image by 180 degrees. 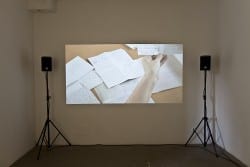 (b.1982) studied at Malmö Art Academy. Working with video, objects, and installations, she often uses documentary material to explore her interest in myth, expansion, and the desire to achieve utopian change and convert others to one’s own vision. In a series of installations, she explores the role of legends in the emergence, expansion, and maintenance of religious and political movements. The most recent work in this series, Länge bor vi på ruinerna av det förgångna [For long we live on the ruins of the past] (2017), focuses on Swedish writer, feminist, and public intellectual Elin Wägner. In 1937, Wägner went on an archaeological field trip to Crete in search of historical examples of peaceful coexistence suggesting alternatives to the violent and war-torn times in which she lived. Following Wägner’s footsteps, Länge… asks what happens when one attempts to merge historical fragments into a new narrative about the past in order to point to an alternative way forward. 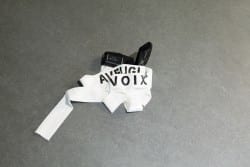 Yen Noh (b.1983) has received a BFA from Hongik University in Seoul and a MA in Transdisziplinäre Kunst from the University of Applied Arts Vienna. Looking into the gap between the “original” and “translation” in cultural relativity, Noh takes language and translation as her themes to produce “speech performance”, in which a spoken language becomes a critical agent to rethink the relationship between spoken language, speaking body and its mind. She is concerned with an archival mind in action and togetherness, in order to create a temporary, yet intimate community of thinking, dialogue and discourse.

When A Form Withdraws Itself is a “speech performance” series that deals with the gesture of withdrawal as affirmative. The series developed from a long-term artistic research into the performance and text works of the artist Theresa Hak Kyung Cha who explored spoken language, voice, and body as a critical intervention of identity. In this exhibition here, the objects of the performance’s documentation are shown, questioning what it means to document performance and what makes it so attractive to think of the relationship between documentation and performance. While a speaking body dominated the space during the performance, Yen is here interested in the ontological question of the visible and invisible transformation of objects in the post-performance. How does the spoken word resist being materialized, yet its technical information and transformation appear by and after performance? Yen experiments with these questions as a preparation for her artist book, “When A Form Withdraws Itself”.