Home » The house of Geiri

The naive artist Ásgeir Jón Emilsson (1931-1999), or Geiri as he was called, was a lively character and a wonderful artist. He had a strong artistic drive and his home represents this clearly. Geiri’s home is virtually the same as it was the day he passed away and there one can see how he lived and worked. 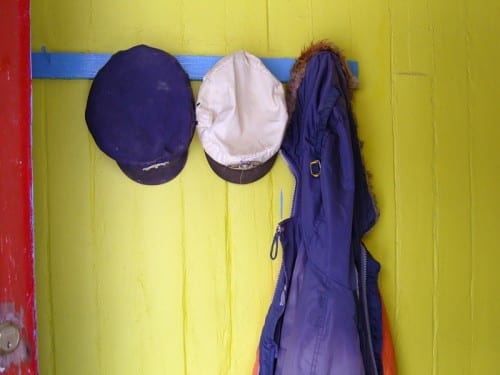 Ásgeir Jón Emilsson, Geiri, was born in 1931 in Hátún, Seyðisfjörður, the youngest of twelve siblings. Geiri always had his home in Seyðisfjörður. He was a fisherman in his early life, travelling between Icelandic fishing villages following the work; but after that, and for the major part of his life, he worked in the fish industry plants in Seyðisfjörður.

Although Geiri’s nature was that of a loner, he always had many friends and people were drawn to his charismatic character, sincerity and consideration for the underdog. Geiri’s hearing was impaired from the start, but he didn’t let this disability restrict him in any way, despite the careless responses of some who made jokes and misinterpreted his language and strange characteristics.

Geiri was a colourful character and a divine artist. He had no artistic training in his upbringing but had an impulsive need for manual creation and his legacy portrays his craftsmanship and artistic gift. Geiri was a true outsider-artist. For the last 20 years of his life, he lived in a tiny house at Oddagata in Seyðisfjörður. This was his studio and here he became truly one with his art. All over his home one sees his artistic touch and recognises motives from his two- and three-dimensional works. Three-dimensional works made of aluminium cans, picture-frames made of cigarette packaging, paintings with recurring motives and a considerable amount of photographs from Geiri’s special point of view, form the back-bone of his unique life achievement. In fact, Geiri’s home was his kingdom and Geiri it’s king. There everyone was equal: Lóli – Geiri’s cat; his guests and himself. The sheriff, taxman, trendsetters and most authorities – except from president Vigdís of course – were excluded from respect in Geirahús.

The outsider-artist Ásgeir Emilsson died in 1999, at the age of 68. In his life he made a huge amount of works that he sometimes gave away and sometimes sold, so it’s hard to find a home in Seyðisfjörður and it’s surroundings that doesn’t have at least one work by Geiri. The greatest monument about this unique artist is his home, Geirahús, where Skaftfell, Center for Visual Art in East Iceland, now runs a museum. 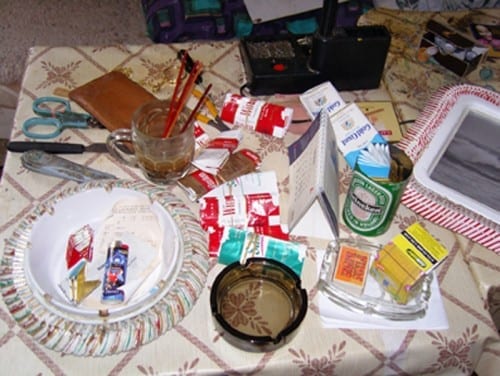 When a mature person feels the urge to create something special and unique, to harness his imagination and joy of expression, there is only one way to do it: go back to where he came from, reopen the doors to his childhood and start again where he left off: to create for oneself.

He emphasizes the image and it‘s motive, how it connects to memories and current affairs. The works portray daily tasks, refering  to folklore and fables, ancient ways of farming, fairy tales and myths. But when the artist is faced with difficulties the ways of his expression changes, it may even become furious and violent, demanding and provocative; it is as though the artists life depends on the outside world paying attention to him. Sometimes the works address ethical, or even political and metaphysical questions.

On the one hand outsider-art has an alluring timelessness, with few exceptions, on the other hand it is tragic in some way, there is a sense of suffocation in a restricted area and an overwhelming loneliness; but at its core, the urge to create, is the same in both instances.

Outsider-art reveals itself in ancient cave art, and then later throughout history. It is diverse, special, it seldom evolves, sometimes sidesteps, but can never be categorized as belonging to a certain style or school in the strict sense of modern art.

The outsider-artist often focuses on the representation of the likeness of features to his model, whether drawing from life or from memory, but it goes without saying that the image is never perfect; it is like watching the world through an opaque glass or gauze, and that is where the miracle starts: a door to a magical world opens up and evokes joy and happiness in the spectators heart, because all of a sudden he stands face to face with his own lost childhood.

Ásgeir Emilsson is an outsider-artist who is in the same instance introverted and extroverted. He seeks refuge with motives that touch the soul, and unique experiences, he takes his work to a place where he can create his art in peace, expressing a naïve heart and unique experiences. The labourers rough hands make miniscule objects out of aluminium cans: tiaras, picture frames, tables and chairs; reminiscent of the Icelandic National Costume accessories whose braids and leaves are made of Silver filigree. The objects made by Ásgeir Emilsson are unpretentious and modest. Still, he has a tendency to remind people of his existence, even though this is done in a modest way such as; by painting his house in beautiful colours, echoing the magnificent nature of the surrounding mountains and the waterfalls that come tumbling down the hills. The photographs portray the relationship with the town’s population, processing experiences and ideas;  sort of filling the void of loneliness, documenting  everyday occurances, the progress of life, unique events or coincidences that enrich human existence.

Ásgeir Emilsson bears no similarity to any other Icelandic outsider artist, neither in the choice of materials nor in his crafting of objects, but elsewhere, especially in the US, the  recycling of aluminium in art- and household objects is commonly acknowledged, as can be seen in books and on the world-wide-web.
Icelandic people are increasingly looking back to their heritage and acknowledging artistic creation that addresses their minds directly; viewing wonderful works of art, spacious masses, unique art objects, beautiful minds. Icelandic outsider-art is a simple  unceremonious expression of life, created by people who are innocently pure of heart, conceived from the core of the psyche – just like gold.